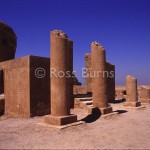 Dura-Europos is a fortress city originally established by the Greeks to protect the river route along the Euphrates. It was probably not established within its extended walls until the second century BC but fell under Parthian control early in the next century. The city was taken by the Romans under Trajan in AD 115. Though […]