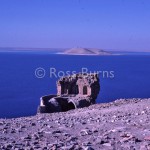 Perhaps the most striking aspect of this Islamic fortified site is its location, today perched on an island connected to the north bank of the Euphrates Lake by a bridge. Not much remains of the castle’s interior beyond the round minaret from its mosque, but the circuit walls clearly show the typical fortified plan of the […]