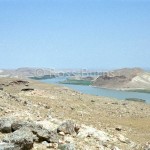 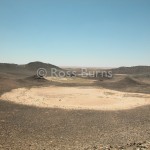 Jebel Seis is one of the most remote and weirdly fascinating sites in Syria. This Umayyad ‘desert palace’ lies nestled into the outer ring of a volcanic cone. The countryside is strewn with dark basalt rocks expelled by the volcanic cone with a white salt pan occasionally providing water and sparse vegetation for the sheep […] 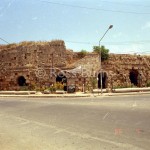 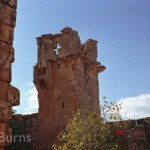 Jerade, on the eastern edge of the ‘Dead Cities’ or Limestone Massif, formed the outer defences of the villages of the Jebel Riha.  Remains include scattered ruins of houses, a fifth century church and a fifth century watchtower. A second tower lies on the northwest side of the ruins. تقع جراده في الطرف الشرقي من […] 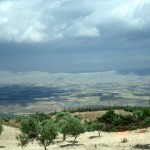 The Orontes crossing at Jisr al-Shugur has been important for millennia. It connects the Orontes Valley and the cities of the interior of northern Syria to the coast via the Bdama Pass over the Jebel Ansariye or Syrian coastal mountains. Little remains of the Roman bridge and its many successors though parts are still exposed […]