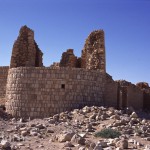 This Roman frontier fort along the Eastern limes was restored in the 1980s by the Syrian Antiquities Department. Reasonably accessible from nearby Palmyra, it provides a striking example of the type of legionary post established along Diocletian’s frontier in the late third century AD. Al-Bakhraa lies in a considerably less intact condition on the opposite […] 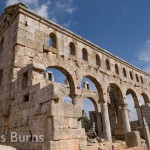 This site on the slopes to the east of the Church of St Simeon presents three churches in remarkable state of preservation. A fourth century church retains both of the columned arcades of its nave. Further up the rise, a sixth century church with its apse preserved. A small chapel lies on the heights at […] 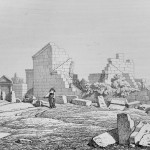 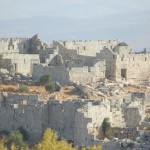 Kirkbizeh lies on the ridge looking over the Plain of Self from the west in the Jebel al-`Ala. Its access to the rich agricultural resources of the plain made this a prosperous village clustered around its manor house and church during the fourth to sixth centuries AD. تقع على إحدى قمم جبل العلا (أو الأعلى) […] 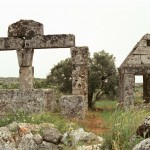 The most significant ruins at this site are the two monumental tombs with pyramid roofs, a reasonably common type in this area in the fourth century AD. Butler describes them as ‘canopy tombs’. The other significant structure is a villa with columned portico. Remains of three churches are barely recognisable. The first photo gallery below […] 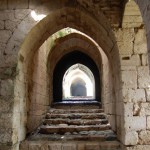 The Krak des Chevaliers has no equal among medieval castle remains. Its construction took place over many decades yet it gives every appearance of a perfectly coordinated example of Crusader military architecture. It comprises two rings of fortifications with a ‘keep’ perched over its southern inner battlements. The outlook from the castle gives stunning vistas […]