Zalebiye, Byzantine fortress, a set on Flickr. This Byzantine fortress (ancient name Basileia) is a companion to its larger counterpart two kilometres upstream on the Euphrates River. While the western walls have been washed away by changes in the river course, much of the eastern side of the enclosure remains, along with some of the […] 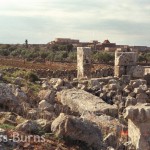 A rather remote ancient settlement lying west of Jebel Sheikh Barakat, the ruins include the remains of a tower originally connected by a colonnade to a sixth century church, possibly forming a monastic complex. I am indebted to Daniel Demeter (Syria Photo Guide website) for images two to four in the following gallery. مستوطنة بعيدة […]